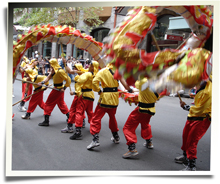 This course introduces students to the most up-to-date research bibliographies, reference tools, and technologies in the fields of East Asian Studies. It familiarizes student with reference materials and primary sources that are crucial for their study of East Asian civilizations. Through analyzing monographs, delivering presentations, translating original materials, and writing book reviews/research prospectus, students learn the necessary skills to conduct research in their respective sub-fields as well as how to put together a graduate level research paper.

An examination of the representations of nature in major Chinese literary genres and human relations to nature during the early and medieval periods. Special attention paid to general shifts in conceptions of nature as well as larger questions of experience, perception and representation.

The year 1949 witnessed the ideological and territorial division of China into various entities—the mainland, Taiwan, Hong Kong, and overseas, which conditioned China’s key position in the emergent global Cold War. Crossing 1949, the Cold War geopolitical constellation began to form in East Asia, which shaped the topography of global, multifaceted Chinese cultures. How to define Cold War modernity and cosmopolitanism in the global Sinophone regions in Asia, North America, and beyond? How did the Cold War propel new ways of expression, concealment, and negotiation along and across the Iron Curtain? This course considers key texts of literature, film, and arts during the cultural Cold War in the Sinophone world. Key issues examined include poetics and politics, migration and diaspora, containment and conspiracy, borders and border-crossing, betrayal and the captive mind, Cold War cosmopolitanism, socialist internationalism, and decolonization, the psychological warfare and domesticity, war narratives and the cultural Cold War. Great importance is placed on class discussion and on creating a dialogue of interpretations of the texts being studied.

In this course we will read the unabridged Tale of Genji, a fictional work by the Japanese court lady Murasaki Shikibu (ca. 978-1015), as well as several critical essays that shed light on it. Completed somewhere around the year 1010 C.E., during the Heian period (795-1185), in the imperial court of Heian-kyō (present-day Kyoto), the work is considered to be, in the words of Donald Keene, “the supreme masterpiece of Japanese literature.” Keene goes on to assert that this work in the monogatari (tale) form is “not only the quintessence of the aristocratic culture of Heian Japan, but has affected the aesthetic and emotional life of the entire Japanese people for a millennium.” But The Tale of Genji is also a major work of world literature. Sometimes compared with the Western novel form due to its intense focus on the internal lives of its many characters, the work has similarities also with the European medieval romance in its presentation of a court-based society and its extreme focus on love in its various manifestations. We will study this work in detail, as a courtly romance—and also as a feminist text. All readings are in translation.

In this course we will examine major social and cultural issues of contemporary East Asia (China, Japan, Korea) from the late-nineteenth century to the present, such as East Asian modernity, colonial identity, memories of war, and contemporary popular culture. The course also highlights the centrality of “everyday life and practices” (生 活, C: shenghuo, J: seikatsu, K: saenghwal) in the organization and experience of modernity in East Asia. These issues will be approached from a variety of disciplinary perspectives including literary analysis, visual studies, social history, women’s and gender studies, and global studies, and a comparative and transnational understanding will be encouraged. The course will also provide a systematic introduction to research and recursive writing processes, and equip students with the necessary knowledge and skills to understand major issues in the larger context of East Asian cultures and societies.

This course introduces the history of the Silk Road—a complex network of trade routes that connected China with the rest of the Eurasian continent over land and sea—and its role in fostering cultural and
material exchanges between the peoples it connected. The course covers the period between 500 BCE and 1500 CE, during which the Silk Road contributed to the forming and transforming the cultural, ethnic, and religious identities of different peoples, such as Chinese, Greeks, Persians, Romans, Arabs, Turks, and Mongolians, and their perceptions of one another. The course, moreover, explores topics, including conspicuous consumption, cultural diversity, religious pluralism, and nomadic migration, as well as the financial, judicial, religious, and social institutions that were the fruits of these exchanges. The course begins and ends with an analysis of conceptualizations of the “Silk Road” against the backdrop of the “Great Game” that played out in the late 19th and early 20th centuries among various colonial powers and its legacy to this day. It also examines the recent push by the Chinese government to establish the
so-called “Silk Road Economic Belt” by tapping into its rich legacy.

< Back to Course Page